Skip to content
HomeVolume 9Issue 3Book Review: Deportable and Disposable: Public Rhetoric and the Making of the “Illegal” Immigrant

In January 2019, the Trump Administration began the “Remain in Mexico” policy. Officially called the Migrant Protection Protocols (MPP), this policy entailed that certain noncitizens arriving at the US southern border be returned to Mexico during their immigration proceedings. Supporters of the policy said it prevented large numbers of noncitizens from entering the country based on unsettled asylum claims. Critics of the policy said it forced legal asylum seekers into dangerous conditions in Mexican border towns. In June 2022, the Supreme Court of the United States held in a 5-4 decision that the Biden administration could end the policy. While the policy has now officially ended, this is just one instance in the long legal and socio-political fight at the southern border over immigration and the recognition and rights of immigrant populations. Indeed, the popular name used for the policy, “Remain in Mexico,” reveals how control over movement across the border is still central to how America is self-conceived.

Lisa Flores’ recent book, Deportable and Disposable, provides a critical rhetorical lens to this history, specifically focusing on the US/Mexico border and how Mexican immigrants are made ‘illegal’ through racialized rhetorics. Using a method of analysis that centers the constitutive and performative nature of discourse, Flores disrupts narratives of ontological stability and certainty to re-humanize the stereotyped figure of the Mexican immigrant. She offers rhetoricians much needed context to how decades of discourse render migrants exploitable and manageable; this national cultural imaginary of Mexican immigrants as such is based on the rhetorical racialization of economic and social factors. Flores’ key contribution to the field is to highlight the constitutive force of this figuration in sustaining racial national projects. She argues that the narratives characterizing Mexican migrants as temporary and cheap labor have constituted Mexicans as deportable, disposable, and racialized as illegal. Deportability requires few actual deportations but rather capitalizes on the threat of legal action to exploit the vulnerable. This cultivation of fear creates a connection between deportability and disposability. Flores provides clarification to these terms: “If deportability is widely theorized as the perpetual state of being liable to deportation, disposability refers to the condition of being used and then subject to disposal – lives discarded” (8). Flores methodically places these two rhetorical conditions in conversation to better understand migration at our southern border.

Flores identifies four key historical tropes that rhetorically racialize into deportable and disposable: “illegal aliens”, zoot suiters, braceros, and “wetbacks.” Thinking with scholars such as Sara Ahmed, Karma Chávez, Judith Butler, and Nadine Ehlers, Flores offers a genealogy of these four stereotypes in each chapter of the book. Through meticulous interdisciplinary work combining rhetoric with theories of performativity and affect, historical and archival work, and critical racial studies, Flores attends to what she terms “moments of rhetorical crisis” where national discourse erupted around Mexican migrant bodies, and she explores how these figures were rhetorically racially produced. Flores maintains that illegality is created and maintained through national control of racialized immigration and capitalist demand for labor. This book traces the discursive production of illegality through logics of race and mobility – a spatialization of illegality as rhetorical racial performance.

The book’s first chapter situates the figure of the “illegal alien” in the repatriation campaigns of the 1930s. This ontological category of Mexican as “illegal alien” is so powerful that close to a century later it still dominates public discourse. Flores provides a careful analysis of a foundational moment where the Mexican “illegal alien” emerged as a racial rhetorical project. While there were repatriation efforts across the country at the time, Flores identifies the Los Angeles campaign as the first that laid the framework for subsequent national plans. Methodologically surveying newspaper archives, Flores reveals how discourses of illegality and criminality combine with spectacle and politics to create an identifiable national threat: the Mexican migrant. Under a climate of hostility, deportations were the legal threat, but repatriation was the social strategy. Still common today, ‘voluntary’ repatriation is euphemistic, as the alternative is formal legal detention and deportation. These repatriations forced thousands of Mexicans to leave the US through a combination of coercion, fear, and threat that coalesced to link being Mexican with being “illegal” and, therefore, deportable. Naming and making tangible a national threat did the rhetorical work of racialization, Flores reveals.

In the second chapter, Flores shifts from Mexican migrants to US-born Mexican Americans, the summer of 1943, and zoot culture. Flores examines what kinds of discourse circulate when the subject cannot be deported but instead requires containment. Here, Flores argues that the violent discourse that targeted zoot suiters is a different mechanism than those who exist outside the nation-state. She articulates how a racialized, gendered, sexualized, national threat was co-created with highly public discourse of rising crime and youth culture. The excess of the zoot suit mapped onto the excess of non-white cultural norms to create violent clashes between Mexican Americans and other youth of color, and white soldiers and citizen vigilantes. The assumed-to-be-promiscuous bodies of zoot-suited men and women were perceived as un-patriotic and criminal, seen as sexually transgressive and directly challenging prevailing ideals of white gender norms through an indulgence in style. War-time fervor coalesced with racialized and gendered stereotypes to create a threat to the logics of race and borders, which ultimately shifted into racial disposability. The fear produced by this perceived threat to the nation consequently was contained through physical violence, but, also, Flores notes, arguably more effectively, through discourses of violence.

Chapter three is centered on a temporal moment of ‘welcome’ into the US for Mexican farm workers: the Bracero Program. Although the Bracero Program relaxed immigration policy for Mexican agricultural labor, Flores argues that the image of the bracero parallels the image of the ‘happy slave’ and does the rhetorical work of naturalizing whiteness through the reinforcement of racial hierarchies and racialized division of labor. Examining US-Mexico international agreements, US labor laws, and the circulation of celebratory narratives in newspaper archives, Flores reveals that the Bracero Program was a testament to the power of discourse on creating and enforcing the nation as a “rightful and righteous power” (84) through shows of national strength by control over racialized bodies. The racialization of these contract laborers emerged out of discourses of deportability and disposability, and in the US historical context of slavery and the use of similar patterns of exploitation and control. The program exploited and controlled the ‘ideal’ labor of poor, desperate, and spatially proximate Mexicans. Flores makes clear that the celebratory ‘promise’ of the bracero was not just to aid the nation in fulfilling wartime labor shortages but also to reinforcing racialized hierarchies of work and control. This racialization was, according to Flores, in part due to circulations of happiness discourse: that the Mexican migrant, in contrast to a White American, was happy to come, labor, and leave. In practice, the Bracero program institutionalized contract labor, changed the US immigration system, and reified Mexican workers as deportable and disposable.

Flores revisits the narratives of illegality in chapter four through the emergence of the figure of the “wetback.” In this chapter, Flores argues that the “wetback” serves as a racial performative that collapsed the body logics of race and mobility logics of borders, thereby creating racial recognition of an emerging stereotype. Flores posits that while immigration laws help discursively constitute race, the concept of racial recognition helps further explain the prevalence of the raced body in discourse. The rhetorical force of a term like “wetback,” Flores advances, is the simplicity of its connotation of criminality and thus deportability. The recognition of Mexican migrants requires their body to be fixed; yet migrants are mobile definitionally. The racial recognition of the “wetback,” Flores argues, is such that they are both familiar and unfamiliar: proximate and penetrative of the nation yet essentially and racially apart from it.

The book’s conclusion reiterates how racialization functions as a rhetorical process dependent on circulating discourses and figures such as “illegal alien,” zoot suiter, bracero, and “wetback.” For the field of rhetoric, what is crucial here is to think of race as rhetorical; the four figures Flores discusses are constituted by moments of recognition and emerge out of both the body logics and border logics for Mexican migrants. Flores states that “we can think discourse, then, as that constellation of vocabularies that makes Mexican migrants seeable and knowable” (154), the intersection at which race is made. The four figures examined function as racial performatives in larger discourses of deportability and disposability, produced as a response to the ontological insecurity of race. The simultaneous desire and disgust for Mexican migrants, managed and contained through racialized discourse, is still pervasive and persuasive.

Deportable and Disposable artfully balances accessibility with methodological richness to theorize race, performativity, and borders. As the winner of the 2021 Book Award from the Rhetoric Society of America, Flores’ contribution to the field is both significant and unique. For introductory graduate rhetoric courses, Deportable and Disposable provides an instructive model both on how to trace discourse through time and how personal positionality strengthens rhetorical inquiry. As an attorney, I found her examination of legal threats in extralegal discourse particularly fruitful and illustrative of the power of rhetoric in creating racialized borders. The book’s turn to the past allows for a detailed understanding of how laws and legal action are used by state and non-state actors to pursue racialized national interests. Flores’ exploration of “racial residues” that “vacillat[e] between strange and familiar” is critical to understand how certain discourses persist and are activated (93). In examining the past and the rhetorical moves that racialize, we, Flores argues, can better understand how race continues to powerfully exert its force. 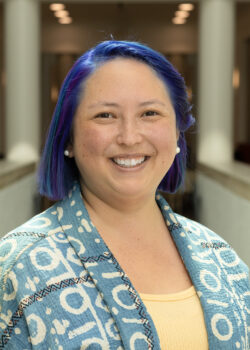 Julie Kidder is a PhD Candidate in the Rhetoric Program of the English Department at Carnegie Mellon University. She holds a JD from Georgetown University Law Center and is licensed to practice in the District of Columbia. Her research seeks to understand the legal construction of multiracial identity and rights through an analysis of legal rhetorics and personal narratives. She is interested in how the specific phenomena of multiracial individuals brings together ontological questions of racial purity and bodily borders, with nation-state processes of mis/recognition based on gender, class, and race.