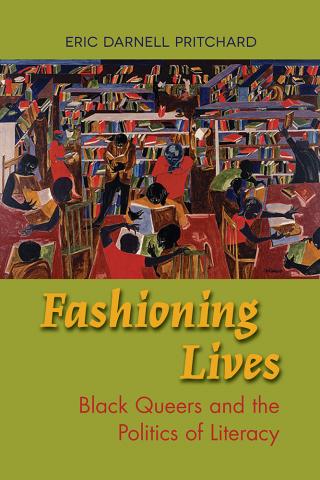 Through inquiry into Black queer literacy practices, Eric Darnell Pritchard thoughtfully and compellingly queers more monolithic understandings of literacy, challenging the fields of literacy, composition, and rhetoric for their inattention to Black queer literacy while arguing for the ways in which these literacy practices might expand understandings of literacy itself. In Fashioning Lives: Black Queers and the Politics of Literacy, Pritchard draws on the lived literacy experiences of sixty individuals who self-identify as Black and LGBTQ, analysis of archival documents, a critical historical examination of oral histories, seven years of field notes, and close readings of Black queer cultural productions. He weaves these methodologies together to bring critical attention to literacy practices that have been largely ignored by rhetoric scholars, arguing that greater understanding of racialized literacies rendered visible through his research “may broaden histories and theories of literacy, composition, and rhetoric” (54).

Pritchard’s prologue powerfully presents his own literacy narrative as a Black, queer, feminist cisgender man. In sharing his own story with the reader before turning to his research participants’, Pritchard both demonstrates the importance of vulnerability as well as illuminates the urgency of his research. Pritchard identifies a series of alternative literacy practices and scholarship by exploring how dominant literacy practices ignored both the racial and sexual dimensions of his identity. He ends his narrative with an invitation to the reader to more thoughtfully consider intersectionality, which “demands nothing less than to imagine a world outside of our own as a point of entry in a more just, empathetic, complex, and connected relationship to one another and also as a richer understanding of ourselves, particularly with regard to our positional ties in the realities of power and difference” (13-14).

In his first chapter, Pritchard examines how literacy normativity functions to mark individuals and the literacy practices they employ as nonnormative, often making them targets of oppression and violence. He delineates the dangerous logics that can arise from this process, whereby the victims of violence are often also held responsible for that violence because of their nonnormative uses of literacy. In response, Pritchard identifies four major themes emerging from his interviews: the relationships between literacy normativity and access to literacy that often discourage nonnormative identity formation, tensions between literacy practices being encouraged but also sites were participants were targeted for their nonnormative practices, the creative acts of navigating those literacy spaces, and what Pritchard names literacy concealment. By literacy concealment, Pritchard refers to “tactics of hiding, stealing, and adoption and (re)creation of place and space (e.g., independent Black, feminist, and LGBT bookstores), which allow research participants to restore some sense of comfort to their literacy performances and inform the meaning they give to literacy itself” (61). Through these themes, Pritchard suggests the subversive power of literacy concealment as a tactic of Black queer literacy.

Moving to faith communities as a site of inquiry for Black queer literacy practices, Pritchard’s third chapter continues to expand on the tensions of literacy as a site of oppression and affirmation. This chapter explores the role of literacy normativity in spiritual violence, through which a person is told that because of who they are, they are rejected by God(s) or a spiritual community (154). In this violence, Black queer people are told they are unworthy of love and care. Throughout the chapter, Pritchard contrasts this spiritual violence with restorative literacies—as enacted through the labor of his research participants and those considered in his historical overview of Black LGBTQ spiritual, religious history and as he explores how literacy practices also inform and fashion Black queer identities in the lives of Black LGBTQ people of faith.

In Chapter 4, Pritchard conducts a webnography of three social networks used by many of his research participants as well as three blogs created by his research participants to examine Black queer digital literacy practices. Pritchard traces how literacy normativity functions even within digital spheres created for and by Black queer audiences, establishing “digital undesirables” based on subjective, oppressive standards of size, age, and other characteristics, which are used to make certain Black LGBTQ people feel unworthy of love and unwelcomed in these spaces. Turning to restorative literacy practices in digital spaces, Pritchard outlines Black queer literacy practices that subvert oppressive body standards prevalent at the intersection of race and sexuality.

In his conclusion, Pritchard posits “what this book demonstrates is what we miss in LCR (Literacy, Composition, and Rhetoric), as well as Black queer studies, when we take the role of literacy in the lives of everyday Black LGBTQ people for granted” (241). Pritchard calls for the importance of continued and sustained scholarship into the intersections of literacy, race, and sexuality—particularly the frequently ignored literacy practices of queer people of color—to inform rhetorical scholarship. Particularly, Pritchard points to the importance of identity in literacy, composition, and rhetoric and how notions of identity might be better unpacked through intersectionality. He argues for “the necessity of intersectionality as not only a theory of identity itself but as a praxis” (247), suggesting the importance of intersectionality as a research methodology and position within the discipline that might illuminate future rhetorical study.

Throughout this work, Pritchard’s methodology offers a useful intervention for future rhetorical considerations of literacy: by focusing not on the meaning created through literacy but the meaning his participants give to literacy, Pritchard importantly shifts the focus of his study from literacy being something enacted on to something enacted by (244-45). His attention to nuance and thoughtful exploration of themes that themselves resist binaries between oppression and resistance while presenting Black Literacies as anything but monolithic demonstrates this work’s contribution to rhetorical scholarship. 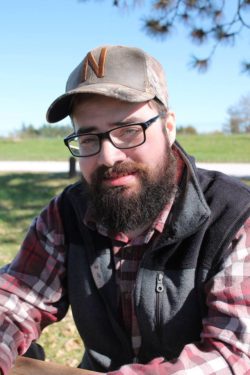 Adam Hubrig is currently a PhD candidate in Composition and Rhetoric at the University of Nebraska-Lincoln. His love for writing, education, and community engagement led him to be deeply involved with the Nebraska Writing Project and the Writing Lincoln Initiative, serving as Co-Director of both organizations. He teaches courses in and is fascinated by community literacy, civic engagement, disability rhetoric, and alternative forms of argumentation. He and his partner, Tiffany, enjoy volunteering in their community and tending to a meager garden, four snuggly cats, and solitary bees in Seward, Nebraska. Reach him at Adamhubrig88 [at] gmail.com or follow him on Twitter @AdamHubrig. @AdamHubrig .