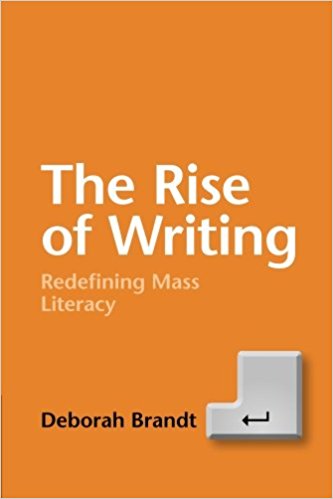 Deborah Brandt has always been interested in the multiple contexts for writing (as seen in her first book, Literacy in American Lives). By examining writing in the workplace, Brandt unravels the various contexts for writing, including how it functions rhetorically and what it can mean politically. In her new book, The Rise of Writing: Redefining Mass Literacy, Brandt demonstrates that, despite popular mythologies, people are actually writing now more than ever. Writing figures prominently in every part of production and productivity, and companies that produce only text are increasing in numbers. In her new book, Brandt makes the surprising argument that there is a new unprecedented pressure on the writing side of literacy in that people now write more than they read (3-4). This is a distinct shift in focus because when literacy first spread as a skill for the masses, it was in the form of reading, not writing.

This shift is important because, as Brandt notes, reading and writing are not as similar as some might think. Reading is more of an internalized and inward experience, while writing is the opposite (163). Reading is about making the material relevant to the reader. Meanwhile, writing is usually about making the content identifiable and understandable to an external audience. Brandt also considers the research in brain activity, sharing that “[r]eading and writing fire up distinctly different parts of the brain, even as they both implicate a shared language region” (165). Reading and writing may not be as closely linked in the brain as once believed, and that challenges old, deeply held beliefs about literacy—how it is learned, how it is practiced, and how it should be taught.

When it comes to beliefs about writing, Brandt finds that many other myths prevail. One belief views “younger people as more adept writers, especially when it came to using computers and handling emergent forms of writing” (147). The other is “that the younger generation is less literate than the older generation…attributed to falling standards in education or degrading effects of new writing technologies” (146). Imagine pedagogical gaps caused when these myths prevail and teachers of writing make assumptions about their students’ experience with literacy as it relates to online and electronic environments. These examples work to make Brandt’s point, which is that our conceptions of writing are not always in alignment with realities about writing.

Brandt reminds us of the political power of writing and the ways in which writing can be subversive and even dangerous through her unique analysis. Brandt writes that there are “constellations of agents and entities who develop, exploit or suppress people’s literacy and gain economic or political advantage by doing so” (5-6). However, in her study, Brandt sees this revolutionary potential even in “government writing, where government writers infuse government documents with aspects of their own subjectivities” (86). There are also other ways that bureaucratic texts are composed to emphasize or deemphasize power and politics with minimal accountability.

For example, Brandt reveals just how ubiquitous ghostwriting is in public contexts. Ghostwriting is a practice that should be of interest to teachers of writing as they navigate conversations about plagiarism and how ghostwriting, anonymous, and bureaucratically authored texts are produced. This is particularly relevant as, in preparation for the 2016 U.S. presidential election, Melania Trump plagiarized a speech previously given by First Lady Michelle Obama. As the scandal erupted, U.S. citizens learned of the vast ghostwriting someone named Meredith McIver had produced for Donald Trump. In a New York Times article, Jason Horowitz wrote, “McIver, a 65-year-old co-author of several books with Donald J. Trump, said that as she and Ms. Trump were preparing her speech, Ms. Trump mentioned that she admired Ms. Obama and read to Ms. McIver parts of the first lady’s 2008 speech at the Democratic convention.” In this historic moment, citizens learned (or were reminded) that political speeches are written by speechwriters, a reality that challenges traditional notions of authorship.

Finally, in current contexts, Brandt’s research exposes how writing “regulation became bound up in relationships of private contract, ownership, copyright, and libel, leaving it weakly protected in the civic sphere” (163). She continues, “Most ordinary writing that is done every day in this society is hired speech, corporate speech, not free speech” (163). Many current contexts for literacy have readers quickly scanning, writing anonymously, sampling, and previewing. Brandt offers a model for working within the system to encourage the more political, empowering, and transformative contexts for mass literacy. She writes that if “public schools were to become committed to a full-fledged, writing-based literacy, they would give society its best hope of recuperating mass writing for civic purposes and not just commercial and corporate ones” (166). Brandt’s “writing-based” pedagogy develops “citizen-students,” who are more likely to engage critically in their inevitable role as authors.

That “writing is on the rise” mirrors my own experience. When people learn that I teach college writing, one of the first responses I get is usually something like, “Good! People don’t know how to write. I’m glad someone’s trying to teach them.” This reaction comes from colleagues teaching in other fields, or people in business, who frequently notice issues in writing through the course of their workday. Or, it is people noticing problems in the writing of acquaintances on social media and in other written exchanges. I am never sure how to respond to these types of comments. Are they talking about typos, incoherence, or ignorance? As a teacher of writing, I see people who are composing sometimes beautiful, sometimes clear, sometimes bland, sometimes hurried, sometimes confused writing. I know that this writing reflects students’ current circumstances and their lives leading up to the point of a due date. I am rarely shocked by the quality or condition of the writing I read.

Writing programs are continually threatened with budget cuts and disbandment. Teachers of writing and administrators of writing programs need to know how to address the concerns and questions about the ways in which writing functions outside of our own field of study, and Brandt offers a perspective on this conversation that disrupts false mythologies and somehow transcends the kinds of conversations we have about writing in the limited scope of higher education.

Students are actually writing now more than ever. What used to be an activity mostly reserved for schoolwork has become what students do in their free time. They are texting. They are commenting. They are writing messages. They are blogging. They are active in online forums. In university hallways and, yes, even sometimes in classroom, their heads are down, their thumbs are flying, and they are reading or writing on their devices.

Brandt offers writing scholars, teachers of writing, and WAC program administrators, and consultants a way to understand writing as broadly as possible as it changes in practice and evolves in theory. Writing in the workplace, and everywhere else, happens in broad contexts and has vast social implications. Brandt’s book offers readers a clearer view of the inherent, pervasive political potential of writing and a better understanding of false mythologies surrounding literacy.

Not all writing may seem consequential, but it is meaningful and it is everywhere. Brandt shows us what it can mean that the masses are producing text, en masse, like never before. 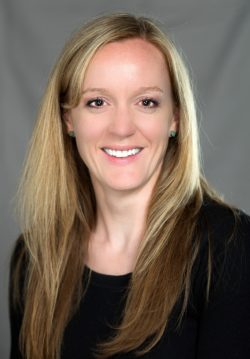 Sheri Rysdam is Associate Professor of Literacies & Composition at Utah Valley University. In addition to her scholarship in responding to student writing, her work is in rhetorics of political economy, contingency studies, and feminist medical rhetorics.