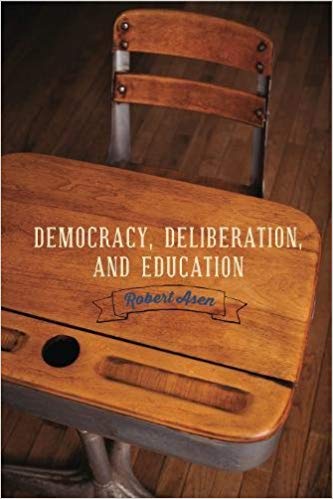 Robert Asen’s contribution to education policy studies is unique in both its rhetorical approach and its localized focus on school board deliberations. Asen maintains that a rhetorical approach allows scholars to understand policymaking as meaning-making that takes place “as a messy, multidirectional, valued process enacted through the discourse of diverse participants” (6). Policymaking, then, is not a linear process enacted neatly among political actors. Asen posits that school boards serve as “sites of local democratic engagement,” which “present opportunities for ordinary folks to engage with policymaking” (3). Thus, school boards are important venues to explore how education policy is discursively constructed and implemented in what Asen calls a networked public sphere through which policy deliberation “circulates among a multitude of overlapping and intersecting sites dispersed in space and time” (18).

Democracy, Deliberation, and Education arises from observations and interviews Asen conducted in three Wisconsin school districts from 2009-2011 as part of a study called the Research on Education, Deliberation, and Decision-Making (REDD) Project, which was supported by the William T. Grant Foundation. Asen’s book focuses on the deliberations of school boards in three diverse districts: Beloit, which “contains the highest levels of diversity but also the highest levels of economically disadvantaged households,” Elmbrook, “which serves a financially stable and comparatively homogeneous population,” and West Bend, which is a “district in transition” with an increasing economically disadvantaged population (12). While focusing on local policymaking, Asen also broaches major national topics of education policy, including inequitable school funding, school choice, integration, and market-based reform.

In the first chapter, “Networked Publics, Networked Policies,” Asen builds his conception of a networked public sphere. He discusses various moments in U.S. history when “different actors operating in an education network consisting of local, state, and national sites have exerted varying degrees of influence over the shape of public policy” (19). He explores the historical landscape of U.S. education policy, noting the shifts from overwhelming local control, to government intervention during the Johnson administration, to the standards-based reform movements of the 1980s and the “accountability regime” of standardized testing solidified by the Bush administration’s No Child Left Behind (NCLB) (19-29). Through this account, Asen posits that regardless of the escalation of federal involvement since the 1960s, school boards remain influential sites of local decision-making and integral components of the networked public sphere of education policy.

He draws from public sphere theory in this chapter, particularly Nancy Frazer’s reimagining of Habermas’s public sphere. That is, he asserts that school boards act as strong publics, “distinct from legislatures,” that engage in opinion formation and decision making and do not just inflexibly implement state and federal directives (35). At the same time, the “accountability regime” “undervalue[s] the capacity of interlocutors in deliberation” and “encourages boards to approach education policy as a marketplace, with districts and schools acting as businesses competing for students and families as customers” (37). He makes clear in his conclusion that this market-based rationality is a major problem contemporary educational actors face.

Asen focuses each of the next three chapters on one school board and highlights three themes raised in the boards’ deliberations: ideology, scarcity, and expertise. The second chapter, “Ideology, Counterpublicity, and The Gay-Straight Alliance,” focusses on perhaps the most “‘rowdy’ deliberation” of the book, as Asen explores West Bend school board’s deliberations about a group of students’ application for a Gay-Straight Alliance. He explains that West Bend is in a generally conservative county, and the board rejected the application in their first deliberation, though not unanimously. Upon the board’s initial decision, the students filed a discrimination lawsuit, and the board was faced with conflicting elements of their ideologies: the GSA’s mission threatened several board members’ “social and religious conservatism,” but the GSA’s attorneys “challenged their fiscal conservatism,” as both sets of attorneys advised the board that they would probably lose in court (40). Eventually, the board’s fiscal conservatism won, and they accepted the GSA’s application. In this chapter, Asen explores the complicated discursive construction of individual and community ideologies. He posits that within the deliberations, the GSA enacted counterpublicity, “a contesting mode of publicity that advanced alternative interpretations of students’ needs, interests, and identities” (16).

In chapter three, “Scarcity, District Finances, and Difficult Decisions,” Asen focuses on the Beloit school board, located in a community experiencing economic hardship exacerbated by the recession. Asen’s aim in this chapter is to understand how scarcity affected the school board’s deliberations about taxes and budgets. He argues that scarcity operates as both a material force that “manifests in a short supply of funds” as well as a perceptual force “through which people perceive the relationship between their needs and the ability of available resources to meet these needs” (77). He begins this chapter with an explanation of how schools are funded locally as well as by the state and federal government. Asen explains how in Wisconsin low-income districts like Beloit receive state aid to compensate for low local property taxes. Namely, the state provides financial incentives for low-income communities to spend money on education; thus, to receive more state aid money, Beloit would need to increase taxes and spending per student.

Asen asserts that “the equalization formula in Wisconsin presumes that board members behave as rational actors who base their decisions fully on financial incentives” (84). However, Asen maintains that the Beloit school board faced difficult decisions about raising taxes for a struggling community or cutting educational funding and losing state aid. Ultimately, the school board slightly increased taxes but “used less than one-third of its full taxing authority” and did not receive full state aid (95). Ultimately, Asen argues that the material and perceptual force of scarcity impeded the board members’ ability to act as rational actors, prohibiting the district from reaping full state benefits. In turn, he demonstrates that “looking solely at financial incentives and tax revenues presents a highly misleading picture of the disparate educational experiences” of students in high- and low-income communities (84) in part because poorer communities have less decision-making flexibility and autonomy than their wealthier counterparts (75).

Chapter four, “Expertise, Integration, and the Problem of Judgement,” also deals with inequitably funded and supported schools, but in the financially stable district of Elmbrook, a suburb of Milwaukee. Asen analyzes the board’s deliberations about Elmbrook’s continued participation in Wisconsin’s Chapter 220 program, which aims to integrate Milwaukee and the suburbs “by providing suburban districts with property tax relief for enrolling minority students from Milwaukee” (110). Facing “decreasing resident enrollments” and “an increasing budget gap,” the Elmbrook school board had to rethink the “educational value and the financial costs of Chapter 220” (124). With the development of the Enrollment Management Tool (EMT), which allowed the board to determine the financial implications of various programs, Elmbrook determined that Chapter 220 was a financial drain on the district. The educational value of the program, such as increased student diversity and the continued education of Milwaukee students, was more difficult to measure. Thus, Asen argues that in their deliberations, the board faced the task of balancing expertise, seen as the quantitative data produced by the EMT and the Enrollment Management Study Team, and engagement, the anecdotal experiences of parents and community members who supported Chapter 220.

One potential solution was to replace Chapter 220 seats with seats from the Open Enrollment program, created to provide families with school choice. Unlike Chapter 220, the Open Enrollment program was not developed to encourage integration and resulted in the opposite: white students leaving Milwaukee schools to attend schools in the majority white suburbs. Espousing this program would help the school district generate revenue and would allow the Milwaukee students to continue attending Elmbrook schools, but unlike Chapter 220, the Open Enrollment program did not provide transportation, a necessity for most of these students. Eventually, the board decided to keep the Chapter 220 seats but not open any new ones. In this chapter, Asen provides a local example of the influence of market-based policy and the intricate differences between integration and choice initiatives. He ultimately argues that “[f]rom the perspective of an accountability regime, expertise trumps engagement” (142).

In chapter five, Asen analyzes the interviews the REDD team conducted with board members and administrators. Asen found that interviewees foregrounded trust as integral to their school board deliberations. In this chapter, he develops a “model of deliberative trust as a relational practice” in which trust is “a quality that may emerge in the interactions of participants—the discursive relationships they mutually construct” (17). Trust is not treated as a character trait or “a set of attitudes or expectations held by citizens,” as is the case in recent longitudinal survey research that found trust to be declining worldwide (148). A deliberative model, instead, focuses on the processes through which trust is built within deliberation by focusing on human relations. To build this model, Asen first explicates the resources that allow for deliberative trust: first, participants draw from experience; second, they attend to the temporal orientation of deliberative trust by drawing from the past, making judgements for the future, and engaging in practice in the present; and third, deliberative trust is context-specific. Then, he elucidates “four qualities of building trust in deliberation: flexibility, forthrightness, engagement, and heedfulness” (159). These qualities constitute a framework applicable for both researchers “for investigating deliberations” as well as practitioners “for bolstering practices of trust in deliberation” (159-160).

In his conclusion, Asen draws from Dewey’s concept of a Great Community, a “reengaged public that would attend to shared concerns and problems” (180). From this perspective, education policy should be formulated through a decentered network that champions local perspectives, as opposed to the top-down approaches of Bush’s NCLB and Obama’s Race to the Top. In this way, Asen posits, school boards, though “far from perfect,” are valuable as local contributors to education policy because “[p]olicies partially made by members of a community help construct ways of living in a community” (184). In his conclusion, it is clear how Asen’s study makes a valuable contribution to critiques of contemporary market-based education reform from both rhetorical scholars (e.g., Gross; Hermansen; Winslow) and others (e.g., Giroux; Ravitch). Asen argues that a market-based approach to education policy incentivizes school and state competition as well as individual choice and in doing so “exacerbates[s] educational inequalities” (190). Importantly, Asen contends that an education marketplace works in opposition to democratic citizenship, as elucidated by Dewey, because it “operates without a notion of a public good” where financial considerations are always at the fore (192). He asserts that revaluing local participation can help policymakers explore “the ways that school districts take up these policies” (185) and understand “structural impediments […] as well as resources necessary to achieve success” (187). An investigation and privileging of local perspectives, then, provides a point of entry for educational actors to reconsider the market orientation of contemporary education policy, which for Asen, is essential to the improvement of public education. 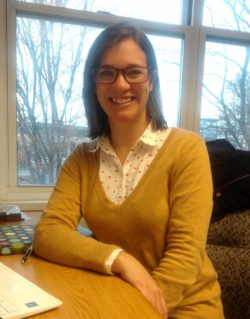 Katie L. Garahan is a PhD candidate in Rhetoric and Writing at Virginia Tech. She currently serves as the editorial assistant for the minnesota review: a journal of creative and critical writing. Her research interests include rhetorics of education policy and reform, professional identity, gender and education, and writing center theory and practice. Her recent work is forthcoming in Rhetoric & Public Affairs.