Roundtree, Aimee Kendall. Computer Simulation, Rhetoric, and the Scientific Imagination: How Virtual Evidence Shapes Science in the Making and in the News. New York: Lexington, 2013. Print. 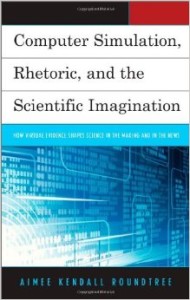 Aimee Kendall Roundtree’s Computer Simulation, Rhetoric, and the Scientific Imagination explores a ubiquitous scientific genre. Although often overlooked and little understood outside of expert circles, computer simulations sit at the center of the latest controversies over climate change—as a search of Google Scholar reveals. Computer simulations also run simple games, such as Oregon Trail, and games designed to teach science to nonscientists (see, for example, the Climate Challenge game produced by the British Broadcasting Corporation). Despite the central role the genre plays in some of the world’s most significant controversies, Roundtree notes that computer simulations are “a much-used but often-misunderstood genre” (105). They have also received scant attention in professional and technical communication (PTC). While writing this review, I searched several journals in the field for related titles. The only thing I found was the work of Chad Wickman, currently of Auburn University. This makes Roundtree’s book most timely for readers in PTC and rhetoric and writing because, as Roundtree demonstrates, computer simulations are thoroughly rhetorical.

As Roundtree points out, “simulation” is used to refer to multiple phenomena, so it is important to understand what “computer simulation” signifies in her work. Roundtree distinguishes a “simulation” from a “model.” Both result from attempts to identify the most significant variables relating to a phenomenon and to define relationships between those variables. Whereas a model is relatively static, Roundtree says, a simulation is dynamic. “Theories and models are abstract data,” Roundtree says; “simulations apply it” (3). For example, if a tub filled at a certain rate (f) and drained at a certain rate (d), then the relationship between inflow, outflow, and the amount of water in the tub (w) could be explained through a simple equation: w=f-d. That equation gives us a snapshot, a single measure, of the relationship between inflow, outflow, and water capacity. That snapshot would be a model.

But if we wanted to examine how the relationship between w, f, and d might change over time (t), then we would need a simulation. To create such a simulation, the model w=f-d would have to be converted into a series of interlinked if-then equations, probably starting from here:

Using a program such as STELLA, those equations could be used to create a simulation like the bathtub game created by Schlumberger Excellence in Education Development. If this bathtub example is any indication, then imagine how complicated a simulation becomes if a scientist tries to calculate, say, the effect of continued climate change on bird populations in the upper-Midwest from now until the year 2030. This would require a system scientist to identify the most significant variables to include in the model—which could include data relating to observations of existing trends in climate change, to studies that attempt to describe mathematically possible relationships between current practices (such as the burning of coal) and rates of climate change, to what is already known about the movement of bird populations in the past few decades, and so on.

Roundtree argues that computer simulation requires a unique type of scientific discourse because simulations do not fit neatly into common models of science. As Perrault has recently illustrated, “traditional” science focuses on systematic observation of “objects” (see Chapter 2). Furthermore, as Latour and Woolgar argue, many of those “objects” are produced in laboratories. In simulation science, however, the argument cannot come from observed objects. In fact, simulations are helpful when something cannot be observed—as when scientists might want to predict changes in bird populations. Put another way, simulation science is not as interested in “accuracy” as in heuristic power. “The most effective simulations acknowledge and account for the uncertainty and gaps,” Roundtree writes, “and they construct compelling arguments that help bring phenomenon (sic) before our eyes and to our senses” (91). This is why computer simulations are useful in highly theoretical disciplines “where the immediate question isn’t truth so much as explanatory or narrative power” (Roundtree 108). Simulation science can be especially powerful in discussions of policy.

Because simulation science does not rely on observation in the way that more traditional sciences do, Roundtree argues, simulation scientists must argue for their “ad hoc” decision-making through the creation of “virtual evidence,” which Roundtree differentiates from other types of evidence that come from firsthand observation, testimony, or the weight of shared opinion. Roundtree characterizes virtual evidence by using the rhetorical concept of energeia. Such evidence is compelling (let us drop “truth” from the discussion) if it seems “vigorous” and “vivid” to others (37). Roundtree’s discussion of energeia and vividness is akin to Postman’s argument that Huxley’s Brave New World offers a more accurate prediction of the future than Orwell’s 1984. This is so, Postman claimed, because Huxley depicts a society in which domination was masked through conditioning, medication, and amusing diversions. In the US, at least, Postman felt that this kind of unseen control was more “real” than Orwell’s picture of overt, direct domination. For Postman, at least, Huxley’s novel offers better virtual evidence than Orwell’s. In simulations, as in fiction, any theory of meaning must account not only for signifiers and signifieds (à la Saussure) but also for people’s will to believe that such signifiers connect to some “external world” (17).

This is not to say that computer simulations and fiction are the same thing. As Roundtree illustrates, computer simulations have several unique characteristics. For one thing, authorship in simulations is distributed because simulations usually include data and calculations cited from other sources, because the software that runs the calculations has been written by programmers, and so on. Simulations also include multiple genres, the calculations, the programming language necessary to put those calculations into action, and the interfaces that allow people to interact with the simulations. Roundtree also provides an intriguing glimpse into how scientists who program the code behind a simulation leave notes, which are often “natural-language guideposts that programmers write within code to explain a sub-routine’s function” (58). Almost hidden within the code of a computer simulation are scientists’ natural language arguments about why a particular equation or assumption has been included. In simulations, these comments become a kind of “Works Cited” for others who study the coding behind the simulation.

Because simulation science can require so many significant decisions about what counts as “fact” and as valid relationships between facts, Roundtree shows “how simulation scientists use particular rhetorical strategies to make and report ad-hoc and other simulation choices” (7). A strategy to which Roundtree devotes a significant amount of attention is C.S. Peirce’s concept of “abduction,” which Roundtree distinguishes from the more traditional forms of “induction” and “deduction.” The difference between these three concepts, Roundtree explains, depends on degrees of certainty in the initial premise.

I must admit that I struggled with this part of Roundtree’s argument. She says that “induction, deduction, and abduction would treat the same premises differently” (32). To illustrate, she provides a deductive argument:

Roundtree then offers an inductive counterpart:

“In both induction and deduction,” Roundtree says, “you know enough about the general or specific rule to make the logical leap and make a claim” (32). This makes sense to me in Roundtree’s deductive example. If I were told that my shirts came only from the middle bin and that the middle bin only contained medium-sized shirts, then I would feel confident about the conclusion. But if I were only told that all the medium-sized shirts in my hand were from the middle bin (as is claimed in the inductive argument), then I would have less reason to believe that all the shirts in the middle bin are medium because random chance could determine that the handful of shirts pulled from the middle bin were size medium—even though that bin also contained a number of small- and large-sized shirts. As a result, I have trouble grasping Roundtree’s claim that induction or deduction involves “knowing enough about the general or specific rule to make a logical leap.” Her inductive example seems to require as much of a leap as her abductive example.

The problem, for me at least, is that the difference between Roundtree’s inductive and abductive arguments cannot be found in the statements themselves. Rather, the difference lies in the degree of belief the audience holds in the premises. Whereas premises can be understood as certain in induction or deduction, Roundtree writes, “abduction is a form of reasoning whereby premises and conclusions share a degree of uncertainty” (72). I cannot help but wonder, though, if the crucial difference between these types of arguments is determined by the degrees of certainty held by rhetors and audiences, then does not presenting them in the visual, sequential “premise1, premise2, conclusion” format most likely obscure, rather than clarify, Roundtree’s important argument about the creation of virtual evidence through argument?

I am not saying that Roundtree’s data is somehow incorrect. Far from it! Having worked with two systems scientists to create a computer simulation of the effects of extended heat waves on urban centers, I find that Roundtree’s observations and data resonate with my own experience. I feel able to offer testimonial evidence saying that what Roundtree has observed matches what I have observed. And Roundtree brings a significant and impressive amount of observation to her book. She explores the deliberations made by scientists as they built a computer simulation, the emails they sent as they wrote a paper about the results of the simulation, the natural language notes they inserted into the program itself, and so on. At the same time, though, I find myself wondering what Roundtree’s analysis would have looked like had she used, say, Toulmin’s philosophy of argument instead of, for example, Kinneavy’s three kinds of induction (32).

In summary, Roundtree offers an important and detailed glimpse into the rhetoric of computer simulations—a genre (or set of genres) that are important not only because they are used in the natural sciences but also because they are used in the social sciences. (For an overview of computer simulation in the social sciences, see, for example, Miller et al. and Mollona.) Roundtree’s study presents a thorough analysis based on a rich data set. As such, it should be widely read in the field. Still, I wonder what that analysis would have looked like if the lens had been something other than traditional rhetorical terminology. 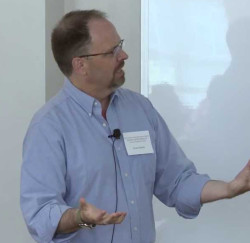 Stuart Blythe is an associate professor in the Department of Writing, Rhetoric, and American Cultures at Michigan State University. His research interests include professional writing pedagogy and administration as well as public discourse relating to science and technology.