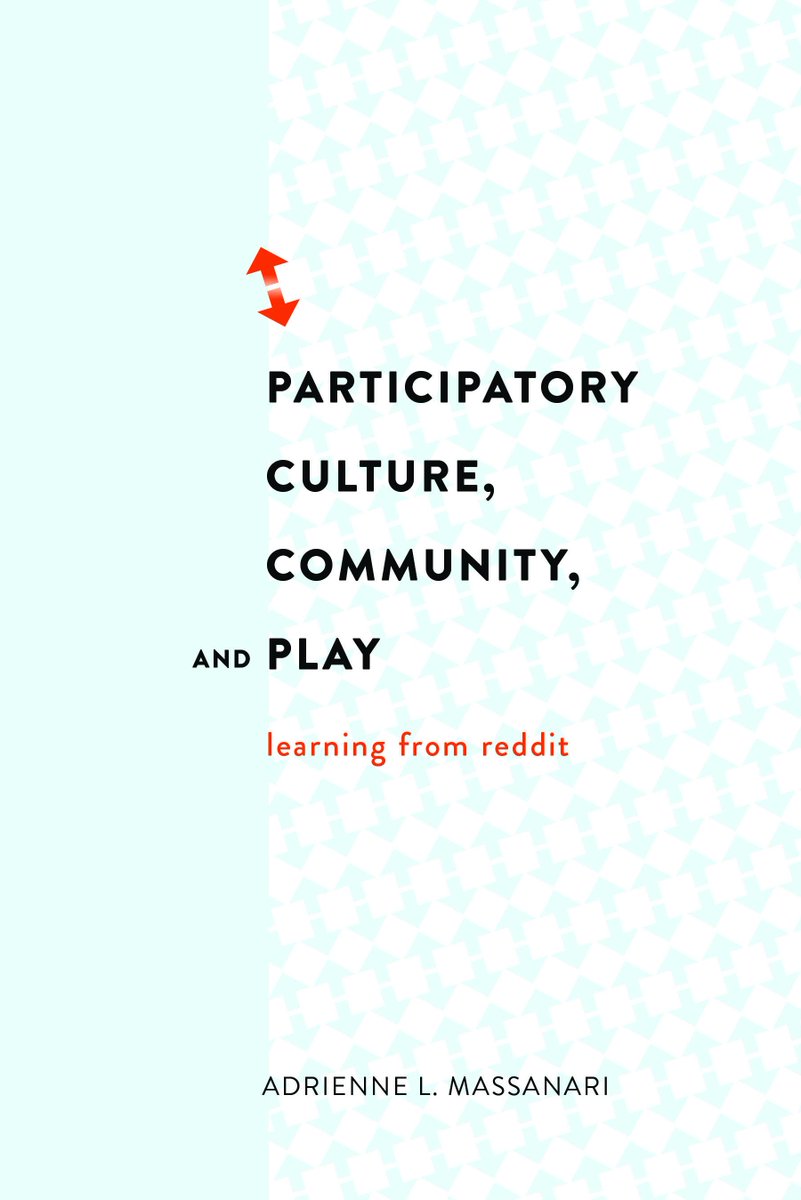 Adrienne Massanari’s Participatory Culture, Community, and Play: Learning from Reddit is a self-described “digital ethnography” of reddit.com. While journalists sometimes label reddit as a link-aggregation and news-sharing site, Massanari describes it as a “community platform” (28). The interplay and tension between concepts of “community” and “platform,” or between intricate social norms and the complex technical logics of the site, is an important focus of this book. The author sets out not only to define what reddit is and explain how it functions in comprehensive detail, but also to document and interrogate “reddit culture.” According to Massanari, aspects of this culture include playfulness, performance, geek masculinity, cynicism, altruism, pseudoanonymity, and—perhaps true of reddit more than any other participatory platform—a fascination with meta-commentary about the history and nature of reddit. Massanari’s argument, beyond asserting the importance of reddit as a cornerstone of internet culture and an ongoing project of creative production, is that we must look at both people and platform to understand reddit in all its glory and gag-worthiness.

Through years of fieldwork, from 2011 to 2014, Massanari explored and engaged reddit, from its “front page” to its far-flung corners. By her own admission, the author became immersed in the community and participated in dual roles of community member and researcher. The result is a thorough study of reddit, written in language accessible to anyone with little or no prior knowledge of the site. The author writes in her conclusion that she hoped to create a “rich, multifaceted portrait of culture on reddit—and the ways in which this culture is contested by its members as well as shaped by the politics of its platform” (169). By any measure, the book succeeds in its purpose, although some readers may perceive a disconnect between the documentary or definitional work of the first chapters and the more analytical and original thinking laid out in the later chapters. The first four chapters of the book provide a kind of “reddit 101,” or a tour of reddit as both a community and a platform (describing its interface appearance, homegrown terminology such as “karma” and “reddiquette,” commenting guidelines, and more). However, the fifth and sixth chapters take somewhat of a different tack.

Chapter five discusses reddit in terms of “play,” a catchall word that Massanari uses to encompass practices and phenomena common across the web, such as memes, bots, reaction GIFs, puns, and shitposting. However, some rituals of play are unique to reddit. For example, “karmawhoring” is the practice of posting content only to get karma, or “invisible internet points” (115). Community members award karma to posts by “upvoting” to acknowledge the post as being clever or useful in some way. Based on reddit’s algorithm for sorting content, upvoted posts rise to the top of threads and potentially earn a spot on reddit’s front page. For a variety of reasons, karmawhores attempt to get these benefits without doing the work of creating original or otherwise deserving content. Karmawhoring is not exactly an effective rhetorical practice; karmawhores often meet with hostility and accusations of “not being a true ‘member’ of the community,” Massanari explains (118). Karmawhoring and shaming presumptive karmawhores is a prime example of how reddit communities are intensely concerned with authenticity and keeping content “fresh,” despite the pseudoanonymity of usernames disconnected from a “real” identity and the potential for “gaming” the karma system as a delightful type of play in and of itself. This example represents the contradictory nature of reddit’s self-imposed rules and expectations. Indeed, Massanari finds that reveling in and debating contradictory, arbitrary community standards provides a source of pleasure for many reddit users.

Chapter six is likely the most relevant for readers of this journal as it tackles some of the difficult questions surrounding the politics of platforms and how communities both counter and cultivate toxic internet cultures.  Massanari focuses in this chapter on how reddit community members use cliquey jargon and arcane discourse to tend the lines between outsider and insider, between novice and expert. As she carefully lays out, this discourse on reddit is heavily linked to values associated with a distinctly masculine and hegemonic version of “geek culture.” In her formulation, performing an “insider” or “expert” persona online often goes hand-in-hand with excluding women and minorities. By leveraging the affordances of the platform and the insider discourse unique to subreddits (a discourse that only gets more insider as the topic gets more obscure), these members make it clear that “the existence [of minorities] is unwelcome and somehow threatens the geek community to its core” (129).

In chapter six, reddit emerges as a microcosm of the internet as a whole. As social media and Web 2.0 in general has matured into an expansive infrastructure focused on data collection and monetization—a shift that Anne Helmond has named “platformization of the web”—the online culture grown from organic networks of personal websites has faded. Massanari claims that today’s “participatory culture (and mediated culture, generally) has been commodified and resold to those of us who make, share, and communicate” in social media spaces (168). Although reddit is not exempt from these changes, one argument that emerges in Massanari’s book is that reddit is somewhat “old school” or a “throwback” to the original and heavily idealized spirit of the internet in the midst of a participatory renaissance. Many moments in the book might trigger feelings of nostalgia for the simpler internet of yore. Although reddit has changed and evolved, Massanari shows how the site has changed less than other social platforms, in terms of design, functionality, and the memes and cultural references that still circulate within various subreddits.

In our current moment, when discussions of free speech, harassment, and social network site owners’ responsibility for community moderation are front and center, Massanari’s in-depth study of reddit is like peering through a lens to examine and raise questions about a much larger world beyond. Many of the explanations for why things are as they are on reddit help to also explain web phenomena more broadly. Reddit is like a tiny internet: a place full of memes that are often offensive and hilarious at once. A place for activism and knowledge-sharing, shitposting and trolling. A place where mob mentality and anonymity more often lead to abuse campaigns and conspiracy theories than not. A place with a soft spot for obscure pop culture, porn, and cats. Like the internet as a whole, reddit is platform where, despite technolibertarian ideals of free speech, participation, and openness, the most enduring online communities must at some point define who belongs and who doesn’t. In the culminating sixth chapter of Massanari’s book, she persuasively demonstrates that understanding the “technological logics” (153) of platforms can only bring insight into why social media spaces all have their own cultures and community norms worth parsing rather than eliding.

This media-specific approach, attending to distinctions and details of a particular platform, offers many takeaways for scholars of digital rhetoric. Perhaps most poignant is the lesson that there are no easy or universal answers for how to address the more troubling aspects of online communities, such as bullying, doxxing, mobbing, and other toxic behaviors. Any such answers must be negotiated between individuals and the technical affordances of the platform they inhabit, often on the fly and in the context of particular cases. As Massanari demonstrates with her extended discussion of the subreddit “/r/ShitRedditSays” or SRS (also known as “the Fempire”), the formation of non-toxic online “safe spaces” or “walled gardens” is one way groups of users subvert a dominant and hostile culture (152-3). Although the author does not explicitly frame this and other examples as rhetorical, her study offers a window into the rhetorical practices of users defending their right to be online and aggressors attempting to drive those so-called “outsiders” away.

As a medium that has shaped the internet we know today, reddit is full of beauty and humor, but it has also nurtured bigotry, misogyny, and racism. The content shared and generated by users on the site regularly goes mainstream, appearing as viral flotsam and jetsam making its way around the web with no indication of origin. A recent and noteworthy example is the “CNN wrestling” video, a mockingly violent meme tweeted by President Trump in July 2017. Unattributed in the tweet, the video was found to originate from the controversial alt-right, white-supremacist-leaning subreddit “/r/The_Donald,” and in particular from a reddit user with a history of racist posts (Kaczynski). As I read Participatory Culture, Community, and Play: Learning from Reddit, I began to better understand this incident and other reddit-related news stemming from the 2016 election and its aftermath. Taken as a whole, this book is a snapshot of an online community that has relevance in contemporary U.S. culture. In the author’s own words, “By documenting how reddit culture exists now, this book also argues for the importance of preserving the nuances of interactions in these spaces as they occur, as global culture is increasingly lived in and enacted through them” (2). One aim of digital rhetoricians might be to continue this work by documenting other important social media spaces in depth, before their nuances are lost to the latest app update or interface redesign. 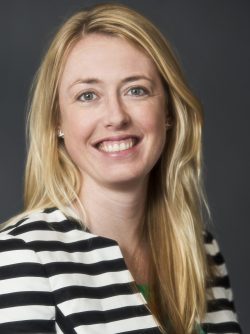 Rachael Sullivan is an Assistant Professor of Communication and Digital Media at Saint Joseph’s University in Philadelphia. Her research addresses topics such as interface design history, visual rhetoric, and internet culture through a feminist-materialist lens. She teaches courses in digital ethics, graphic design, and web design.