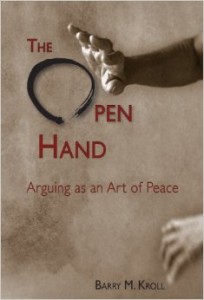 The Open Hand is based on Arguing as an Art of Peace, an experimental first-year course that Barry M. Kroll taught for five years at Lehigh University. Put simply, his aim is to encourage instructors to embrace new ways of teaching argumentation. For Kroll, this means drawing on non-Western practices to become aware of and to interrogate what Deborah Tannen identifies as an adversarial and oppositional culture. The paradigm that Kroll borrows to illustrate this difference is the closed fist and the open hand. He presents the book concisely, without “a comprehensive review of the literature as well as extensive citations, believing that they would detract from my purpose” (4). By sidestepping academic convention, Kroll successfully approaches argumentation from new and imaginative angles that would otherwise be unattainable or truncated. The book’s disengagement from conventional academic debate seems to embody precisely the sort of new approach that Kroll explores. He allows the American culture of confrontation and opposition—and attendant argumentative structures—to rise in relief beside his thoughtful alternatives. That said, Kroll’s target audience is, in the most open and positive sense, anyone who will listen attentively and consider new pedagogical frameworks and argumentative structures. The text will be particularly illuminating as a counterbalance to foundational texts in survey or introductory courses; however, students and instructors in search of theory or historicized methodology should look elsewhere.

Kroll builds his methodologies around pithy abstraction in the manner of James Berlin (2003) and Byron Hawk (2007). Unlike Berlin and Hawk, Kroll does not historicize the field; what sets apart his approach to teaching and writing is that the open hand is quite literally integrated into the course. A late student of aikido (he started lessons at age fifty-seven), Kroll writes of aikido’s core technique of redirecting an attacking opponent’s energy. In addition to standard class sessions, students join Kroll for a lab session each week to practice extended meditation and modified aikido maneuvers engineered to neutralize attacks while keeping both attacker and defender safe—fighting with an open hand. These maneuvers embody for Kroll three argumentative modes that he began developing in the late 1990s: deliberative, conciliatory, and integrative—each of which is treated in a separate chapter of the book and explored in distinct but complementary units of the course. Each modality features a corresponding tactic.

At the beginning of the course, Kroll’s students respectively settle on a research topic to explore all semester long through each of the three modalities. The course begins with deliberative argumentation and the tactic of reframing. In the first unit of the course and Chapter 2 of the book, Kroll calls attention to the prevalence of quotidian disagreements and the flight-or-fight binary characteristic of Western opposition. Instead of engaging in linear argumentation (head-on opposition or flight), Kroll introduces the idea of the “slant” with cardboard arrows—oblique argumentation that changes the angle of opposition, from head-on to some new angle of approach. This, the essence of reframing, is reconstituted as “searching for better problems.” To do so, Kroll suggests shifting attention from particular points of disagreement to larger issues, expanding the set of options available for consideration, or introducing new perspectives into the disagreement. This framework is presented to students as a viable and ethical option for argumentative writing and as one in which they become facilitators of a discussion instead of participants in a debate. Cultivating mindfulness, a tenet of the course, generates patience for creative resolutions and creates awareness of possibilities for reframing an argument.

What if reframing does not work? In the second unit of the course—Chapter 3 in the book—Kroll introduces conciliatory argument and the corresponding tactic of attentive listening for when “differences need to be acknowledged, not redirected” (61). To illustrate the basic premise, Kroll re-positions his cardboard arrows from opposing to parallel and facing in the same direction. The premise is configured as a slowly performed aikido maneuver during lab: defenders practice turning with attackers to stand facing in the same direction. (They merely go through the motions, without aggressive confrontation.) Students also practice painting simple Japanese calligraphic characters with “mind-body focus” (75). Here and throughout the book Kroll invokes Rogerian argument—particularly from Young, Becker, and Pike’s Rhetoric: Discovery and Change (1970)— which he encountered as a new doctoral student at the University of Michigan in the 1970s. Concentric with re-positioning the arrows and the (modified) neutralizing aikido maneuver, attentive listening embraces the Rogerian premise of intently considering the opposition’s viewpoint before articulating one’s own. Kroll lays out five steps for conciliatory argumentation and presents students’ revised conciliatory thesis statements. For Kroll, the sample theses embrace the important balance of “yin (receptivity)” and “yang (assertiveness)” (67). Traditional thesis statements, he explains, can pack too much of the latter; therefore, conciliatory argumentation is permeated with respect and punctuated by reciprocity—emphasizing one’s opinion as much as the opponent’s.

The fourth chapter of the book discusses the third course unit: integrative argumentation and the corresponding tactic of mediation. In this third scenario, the writer must intervene where two opponents are locked in place. Kroll introduces a third cardboard arrow that wedges opposing arrows apart and, now parallel, places them in a new direction. He explores techniques for mediating that boil down to helping opponents find common ground for agreement. Kroll presents specific options in the book and charts them in students’ essays, including helping both sides get most of what they want, getting both sides to favor interests over positions, and “bracketing” points of impasse for the sake of broader cooperation (92). He reinforces the basic premise of finding imaginative solutions through professional and academic readings and students’ accounts of attempting to mediate disputes outside of class. Particularly intriguing is Kroll’s introduction of koans, “puzzling stories designed to challenge and disrupt discursive thought” (93). Also worthwhile are Kroll’s borrowed insights: forms of agreement are innate to disagreement and smiling is part of the aikido stance. In an integrative twist on concluding statements in essays, Kroll introduces his students to the use of concluding questions as a responsible means to keep dialogue open between deeply entrenched opponents or to delay taking sides in a discussion.

Kroll points out that Arguing as an Art of Peace is not a composition course, although both formal writing and regular journaling factor heavily into the curriculum and are measurements of course objectives. Kroll cites students’ journal entries that speak to the course’s effective cultivation of mindfulness in their daily lives and to newfound approaches to argumentation beyond formal writing. But he does not favor only positive comments. In the last chapter, he cites students’ uncertainties about content and about the connections he attempts in his “conceptual-procedural” methodology, especially in early iterations of the course. It would be instructive to readers to know more about the resultant changes he made in light of these critiques and whether he found any more success with those changes. A cynic might fault Kroll for a pan-Asian survey of seemingly disparate techniques, and some instructors might be hesitant to let students even simulate martial arts maneuvers in class. But for Kroll it seems that the principle of aikido—meditative breathing, Japanese calligraphy, and soft argumentation—constitute four slices of the same pie, whatever their respective origins and pedagogical risks. In doing so, he recognizes the need for closed-fist argumentation while seeking to moderate its use.

A reader has to admire Kroll, too, for his transparency about the aims of the book. Although he addresses some timely concerns for the field of composition and rhetoric in his endnotes, he largely avoids entering into lingering academic debates. That said, if one can say, for example, that James Berlin’s academic subject is ultimately subjectivity and that Byron Hawk’s is complex vitalism, then Barry M. Kroll’s is energy. As such, Kroll’s facilitator is, like Berlin’s subjectivity, a liminal—albeit apolitical—figure: “not an assertive arguer, neither is he or she a passive moderator” (38). Most of all, this book and its author model the kind of learning, generosity, and risk-taking that Kroll clearly values for his students. In short, it would be difficult to regard Kroll’s The Open Hand as anything other than a generous offering in the vein that he prescribes here for a reconfigured approach to argumentation. 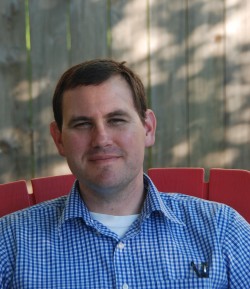 Justin Nevin is a PhD student in English at Binghamton University. His developing research interests are in education, American studies, and critical theory. A former high school English teacher, he recently published "Is It Easy Being Green?": Writing the New College Application Essay (Sourcebooks, 2014), which introduces high school students to the genre of the personal essay.